Distributed databases are powerful, but they come with lots of complications.
By Michael Kaminsky 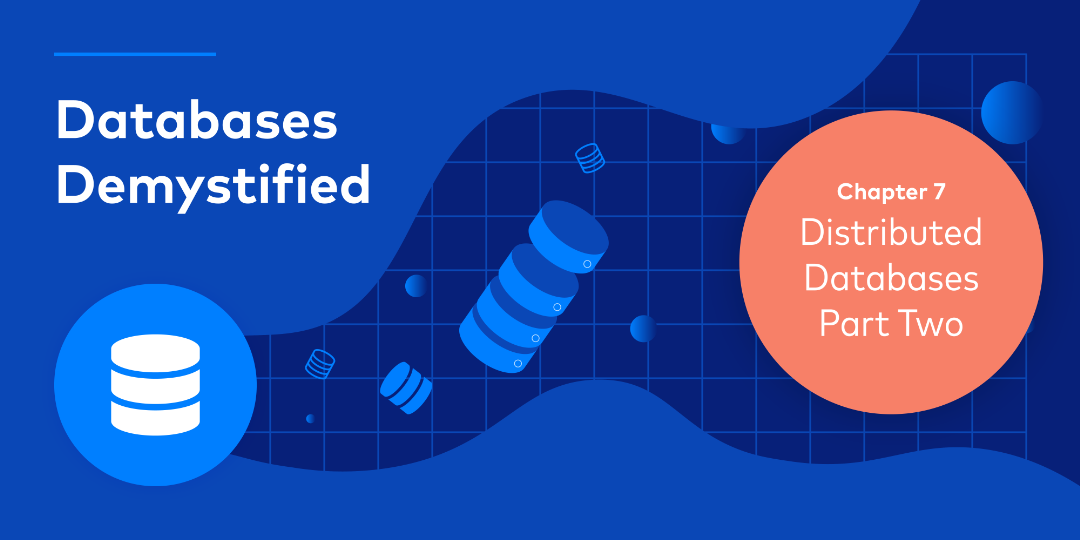 The following blog post is the seventh chapter in a primer series by Michael Kaminsky on databases. You can read Chapter Six if you missed the first lesson on distributed databases, or watch the complete series on YouTube.

The first concept we want to introduce is the idea of a “leader” node. In the last lesson, we showed how a “big compute” distributed database might work, but we didn’t mention that an additional computer is required here. We often refer to this additional computer as the “leader node.” The other nodes are often referred to as “follower” or “compute” nodes.

The idea of a leader node is really important, and today we’re going to talk about the different types of “decisions” the leader node might need to make in different circumstances, and where and how things might go wrong in the interactions between leader node and compute nodes.

The first issue I want to talk about is the situation where the leader node loses contact with one of the follower nodes. We can imagine lots of reasons this might happen. Maybe the power went off in the data center, or the internet service provider in the region went down. It could be a temporary blip due to network traffic congestion, or it could be because the computer itself had a fatal error and completely shut down.

The leader node must answer a number of questions:
Questions like these are crucial when designing and working with distributed databases. We must think through what’s going to happen when different parts of the system break down in advance. Don’t forget Murphy’s law of distributed computing: If a node can go down, it will go down!

In general, how do we manage transactions and locking in this new world where multiple copies of the data might live on different nodes that have different amounts of latency when communicating with the leader node?

This gets a lot more complicated in a distributed database than a single-node system, because we have to apply the locks in more places and manage the state of the data in more places, while remembering that we could have a network outage at any time.

In the next lesson, when we talk about consensus, we’ll discuss in more detail how distributed databases make these decisions under the hood.

Another problem we face when working with distributed databases is the problem of an imbalanced distribution of data across the different nodes. A simple example is when data on one node is being accessed much more frequently than data on another.

This could happen if, for example, your data are distributed across the different nodes by the data of creation. If more recent data are accessed more frequently (something that is generally true in databases) then one node will end up having to work a lot harder than the other nodes.

In this case, we don’t actually use our distributed database to its full capacity because we have a lot of nodes that aren’t doing any work at all. We’d rather have the computational load evenly balanced across our nodes. So, if we have an imbalance of data and access across the nodes, how can we actually move the data between nodes?

So, whenever we talk about moving data between nodes, for whatever reason, we have to keep in mind that this is the slowest way to access data and we can quickly lose any gains in efficiency that we got from using a distributed database if we need to send too much data over the network.

Let’s take a look at how this can be a problem in a big-compute setting. In the last lesson, we looked at an analytical query where we counted the number of users in each state, and observed that it was very efficient. Each node could count its data separately, and then we could add up the results from each node at the end to get our answer. By calculating in parallel on the different nodes, we were able to speed up our query.

We can see that all together here:

Unfortunately, this is very slow because we have to send the list of users from each follower node over the network to the leader node! Any time a database has to move data between nodes in order to respond to a query, we’ll have very slow response times.

This is of course slower than what the response time would be if we were doing this all on a single-node database. Instead of saving time by distributing the job and performing our operations in parallel, here we end up losing time because we have to send so much data over the network.

The CAP theorem is talked about frequently in the context of databases, though there is some controversy over how applicable it is and whether it’s actually the best framework for talking about trade-offs in distributed databases.

So for distributed databases, the choice is really just between “consistent” and “available.” Should we make sure that the database is guaranteed to return consistent, non-stale data, or do we want our database to return something at all times, even if it might be stale?

Let’s imagine this situation where we have our distributed database. Two of our nodes have stale data, and one node has the fresh and correct data. Our leader node knows which nodes have which data because it’s been keeping track of which data updates have completed successfully on each node.

The choice may depend on you how you plan to use the data. If we’re actually keeping track of account balances in a bank, then we probably prefer that our data is consistent instead of available. However if we’re just keeping track of the number of visits to our webpage, it might be okay that the data is a bit stale and we’d prefer to have our database return the stale data than nothing at all.

Some people have criticised the CAP theorem for being overly simplistic, especially in the context of distributed databases, where we know that network partitions are a fact of life. In fact, within distributed databases, whether there’s a true “outage” or not, we’ll always face a trade-off between latency and consistency. That is, there will be different amounts of latency between our different nodes and so we’ll always have a choice of returning potentially stale data earlier vs. waiting for all of the nodes to return.

If you’re interested in learning more, I’d recommend checking out the PACELC framework, which makes this trade-off more explicit.

How data is distributed across the nodes can impact performance dramatically, and this impact will be different for different queries.

Finally, the CAP theorem helps us reason about the trade-offs we make when we experience network outages — in the case of distributed databases, that means a trade-off between consistency and availability.

In the next installment of this series, we will discuss consensus in the context of distributed databases.

The series continues with Chapter 8 here.